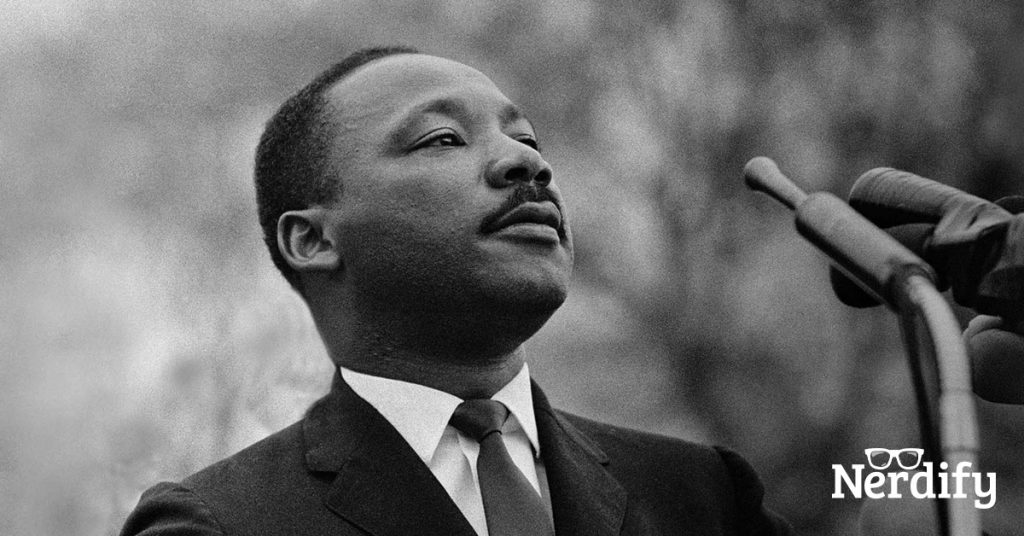 Martin Luther King day – celebrates the birthday of one of the most famous leaders of the civil rights movement of the 20th century. He is well known for the advancement of civil rights in the United States via nonviolent protests and civil disobedience.

But why does this public figure get a whole Federal Holiday all to his name? What did he do to deserve such a huge honor? Nerdify, is happy to shed some light on this 🙂

First, some facts from King’s early life (being all Nerdy as usual):

* He graduated from Morehouse (in 1948) with a B.A. in sociology and enrolled in Crozer Theological Seminary in Chester, Pennsylvania, from which he graduated with a B.Div. degree in 1951.

* King received his Ph.D. in systematic theology from Boston University in 1955 (he was 26).

And this is where the fun begins, this is when King got involved in organizing large protests to oppose the racial inequality that was widespread in the USA in the middle of 20th century.

It all started with Montgomery bus boycott in 1955 when a young black girl refused to give up her seat on the bus to a white man. The boycott lasted for 385 days! King’s energy and resolve made him a national hero for the African-American community, who saw a leader they could unite around to fight for equal rights.

In 1957, King and other social activists formed a Southern Christian Leadership Conference (SCLC) to fight racial inequality and advance civil rights reforms in the US.

His struggle eventually lead to the massive March on Washington for Jobs and Freedom, where King delivered the world-wide famous speech – “I have a dream”.

We would like to quote a small part of the speech (because it’s so incredible):

“I say to you today, my friends, so even though we face the difficulties of today and tomorrow, I still have a dream. It is a dream deeply rooted in the American dream.

I have a dream that one day this nation will rise up and live out the true meaning of its creed: “We hold these truths to be self-evident: that all men are created equal.”

I have a dream that my four little children will one day live in a nation where they will not be judged by the color of their skin but by the content of their character.”

Why did King organize all these rallies across the country? How exactly was King planning on delivering a decisive blow on inequality in the United States? Wikipedia provides the best answer:

“King believed that organized, nonviolent protest against the system of southern segregation known as Jim Crow laws would lead to extensive media coverage of the struggle for black equality and voting rights. Journalistic accounts and televised footage of the daily deprivation and indignities suffered by Southern blacks, and of segregationist violence and harassment of civil rights workers and marchers, produced a wave of sympathetic public opinion that convinced the majority of Americans that the civil rights movement was the most important issue in American politics in the early 1960s.”

And he was absolutely right:

“King’s main legacy was to secure progress on civil rights in the U.S. Just days after King’s death, Congress passed the Civil Rights Act of 1968. Title VIII of the Act, commonly known as the Fair Housing Act, prohibited discrimination in housing and housing-related transactions on the basis of race, religion, or national origin (later expanded to include sex, familial status, and disability). This legislation was seen as a tribute to King’s struggle in his final years to combat residential discrimination in the U.S.”

In a nutshell – this is it -> Martin Luther King was instrumental in advancing civil rights reform and has dramatically improved racial equality in the United States by pushing the authorities to pass Civil Rights Act of 1968.

We don’t want to stop here because King’s life is full of incredible fact that we’d like to share:

* He was the youngest person at the time to receive a Nobel Peace Prize (he was just 35!)

* During his career as a social activist, he traveled more than six million miles (that’s about 10 “trips” to the Moon and back!)

* He was arrested 29 times and FBI was tapping his phone, pretty much since the beginning of his career in 1955.

* King was almost killed ten years before his death (a crazy woman stabbed him with a knife in his heart during his book signing event in Harlem).

* There are almost a thousand streets named after Martin Luther King (after King’s assassination, cities across the nation began naming streets after King, to cement his legacy and achievements).

Martin Luther King fought incredibly hard (eventually giving his life to the cause) to end inequality in the United States. Giving the fact that half a century later the USA would elect it’s first African-American President (and a damn good one), we think he would be proud of his accomplishments 🙂